Here's What The Instagram CEO Says About Copying Snapchat on Stories

So yesterday we logged on to Instagram as usual and got a bit of a shock when we saw what looked liked Snapchat inside our favourite app!

At first I wondered if there was a merger between the two, did they decide to come together and create one app that has all their features? Turns out NO, that's not the case. There is no Snapgram!

Instagram just blatantly decided to copy what Snapchat does, incorporated it into their app and called it Instagram Stories.

The worst thing about it, at least for Snapchat, is that social media pundits are already saying this Instagram update is better than Snapchat, because it will also allow followers to comment on the stories' posts.

If that's the case, I would also agree that it's better because my frustration with Snapchat and why I didn't really give it time is because you just post a story and hope people watch... Also, I didn't quite understand how you get to interact with others nor how one grows their following on the platform. It seemed the only way was for you to keep asking followers on your other platforms to follow you on snapchat. Think of the number of times you saw Twitter names being changed to Snapchat handles, and how people posted their Snapchat videos and filtered pics on Instagram while directing their followers to Snapchat.

Instagram probably got tired of these referrrals and decided to bring these snap features to its app. 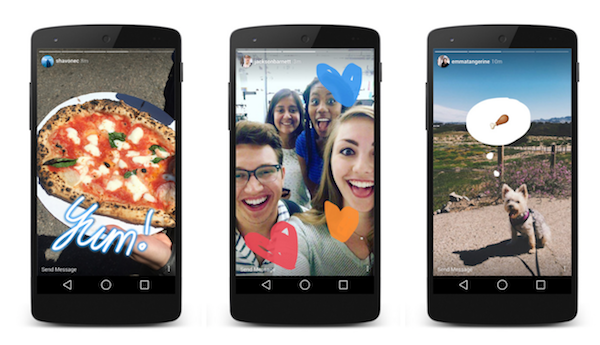 In an interview with Tech Crunch, Instagram CEO Kevin Systrom admitted that they copied Snapchat so Snapchat deserves all the credit. I loved his complete response because it talked to the sentiment that "Everything that can be invented has already been invented."

Here is what Kevin said:

“When you are an innovator, that’s awesome. Just like Instagram deserves all the credit for bringing filters to the forefront. This isn’t about who invented something. This is about a format, and how you take it to a network and put your own spin on it. Facebook invented feed, LinkedIn took on feed, Twitter took on feed, Instagram took on feed, and they all feel very different now and they serve very different purposes. But no one looks down at someone for adopting something that is so obviously great for presenting a certain type of information.

And I think what you see is that every company looks around and adopts the best of the best formats or state-of-the-art technology. Snapchat adopted face filters that existed elsewhere first, right? And slideshows existed in other places, too. Flipagram was doing it for a while. So I think that’s the interesting part of the Valley. You can’t just recreate another product. But you can say ‘what’s really awesome about a format? And does it apply to our network?’

Gmail was not the first email client. Google Maps was certainly not the first map. The iPhone was definitely not the first phone. The question is what do you do with that format? What do you do with that idea? Do you build on it? Do you add new things? Are you trying to bring it in a new direction? We’re bringing some new creative outlets with ‘neon drawing.’ You have different ways of navigating back and forth with this. You have a completely different audience. If you’re a business, if you’re a celebrity, if you’re an interest-based account, you can have a giant audience. It’s going to feel very different. I don’t believe these two things are substitutes, and that’s okay.”

I think there's a lot of wisdom in what he's saying.

Perhaps you've been wanting to start a business and you thought " Argg... but it already exists." Well, the point isn't whether or not that idea has been implemented, it's about how you can improve on what's already out there to better meet your target audience/consumer's needs.

Have you tried out the new Instagram Stories? Would love to hear your thoughts on them!

You can read more about Instagram Stories and what's new HERE.