Swazi Dlamini On Family, Longevity And The Business Of Music

This year marks 20 years since the release of the first Joyous Celebration album. One of the most notable vocalists to come out of the remarkable group is Swazi Dlamini. She captured audiences with her voice which led some of the group’s most notable songs such as ‘Keep The Faith’ and ‘I’ve Got Something’, before ultimately going solo.

Now, 15 years since the release of her debut album, 'My First Love', she is back with a one-of-a-kind offering for her fans with 'The Alabaster'. She notes that having been in the industry for so long, she feels as though she has had to become more responsible in recent years as what she does now will speak for the rest of her career life.

“The secret behind my longevity is in knowing who I am and being content. I understand that I am running my own race and I never want to be pressured by other people’s successes,” she says.

“The secret behind my longevity is in knowing who I am." - @SwaziDlamini

Much has been written about Swazi over the years and more often than not, the coverage has been negative and deeply personal. This encouraged her to grow a thick skin quite quickly. “People will always have opinions. I can’t sit and mope about it,” says Swazi.

The bad press has not stopped Swazi’s journey and how she goes about her everyday life. She is very public with her children with violinist Tshepo Mngoma, but dictates how much she exposes them to the spotlight so that she still has some level of control.

Swazi and her husband have been together since their days at Joyous Celebration and have worked together on their various projects over the years. While they have found that they can’t separate their work and private life, she says they try their best to maintain balance between the two. 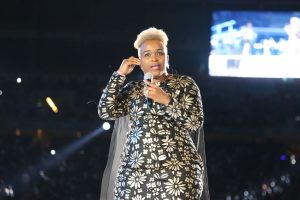 Joyous Celebration came at a time when Swazi had enrolled to study Light Music at the Natal Technikon where she majored in piano. She used what she learnt during her time at Tech as well as observing the behind-the-scenes of the major production which is Joyous, to craft her own unique path. She says that the magnitude of her dream made her roll up her sleeves and get her hands dirty in order to become who she would ultimately become.

The busy mother of three has had to put her clothing line as well as a TV project on hold in order to focus on this show and her 2018 international tour because the music is the driver of her other passions.

Titled 'The Alabaster', Swazi’s new show makes reference to the bible passage in Luke where an unnamed woman poured her most expensive perfume on Jesus’ head. The disciples though that it was a waste, but to the woman, it was her ultimate sacrifice. With this project, Swazi will be giving out her ultimate sacrifice and worship with her current ministry.

The show which takes place on Thursday, 28 September will feature three stages as well as appearances from other collaborators such as her friend Judith Sephuma. Tickets are available on Computicket.